How To Remove Scars From Face Permanently

Most people have scars somewhere on their body, whether from an injury, surgery, or even just some kind of birthmark. While there are some people who don’t mind having visible scars, sometimes the appearance of scars, especially on the face, can cause embarrassment or make someone feel self-conscious.

If this sounds like you, and you have been curious about how to remove these scars from your face permanently, Fox Vein & Laser Experts has the answer for you. Meet the PicoWay® Laser! The PicoWay Laser can help improve the appearance of your skin where the scars are present and even eliminate those scars altogether. It can remove unwanted pigment, and revitalize the tone and appearance of your skin. This device uses pico technology to make magic happen!

Here’s how it works: the laser delivers short beams of concentrated light to the area of the skin where the scar is located. These beams are only aimed at the skin for picoseconds — that’s a trillionth of a second, so when we say short beams, we really mean short! Even though the laser meets the skin for such a small amount of time, these beams have enough strength and power to break through the cause of the scar and create new, healthier skin cells that will help the scar fade completely, or at the very least, blend in with the skin so it’s much less visible.

Let’s back up for a moment though and talk about scars in general. How do these skin woes form in the first place?

Scars form because of some kind of damage done to the skin, whether on the outermost layer called the dermis, or to one of the deeper, thicker layers of skin. The injury results in scar tissue forming at the scene of the skin crime, which is going to be a different texture than the surrounding skin. It may be a different color as well. While scars are not particularly dangerous in any way, depending on the placement and how noticeable they are, they can certainly cause damage to self-esteem.

PicoWay Laser Technology works on Everything

The PicoWay Laser technology works on everything f 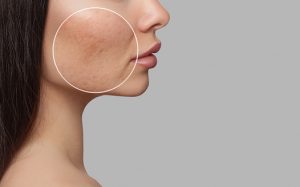 rom the smallest of scars to larger surgical scars. Acne scars, mastectomy scars, post-surgical scars, injury scars… PicoWay Laser does the job for everything. It’s safe on all skin types and provides a much more comfortable experience than previous methods of laser scar removal. That’s because of those short, intense bursts of energy from the laser, and what’s called the photoacoustic effect, which is defined as a formation of sound waves following light absorption in a material sample. The PicoWay laser uses this, instead of the photothermal effect, which is associated with electromagnetic radiation. The photoacoustic effect decreases the risk of the skin heating from the laser and causing damage to surrounding tissue. Since the skin barely comes into contact with the heat, sessions are much faster — only about 15-20 minutes per treatment — and there is little to no downtime following a treatment.

Our patients have started to see results right away. In fact, clinical studies show that acne scarring can be reduced after only three treatments. The PicoWay laser not only works to remove unsightly and embarrassing scars, but it can also improve the appearance of wrinkles, treat discoloration of the skin, and is even be used for laser tattoo removal.

Important Things To Know Before Getting Tattoo Removal
Is It Safe To Get Full Body Laser Hair Removal?

Disclaimer: Fox Vein & Laser Experts is owned by Dr. Susan Fox, DABVLM, D.O., RPVI, FSVM and makes the best effort to treat your vein problems. The vein treatment results may vary for an individual patient based on the diseases and problems. Fox Vein & Laser Experts does not guarantee that you will experience the same results as highlighted in ‘before and after’ pictures and as shared in testimonials.